Not to get super dark or anything but if the past 20 months (yes, it really has been that long) could be boiled down to a single idea, it would likely be liminality, or the disorienting state of transition between life stages and how those transitions disrupt our idea of space and time.

It is this phenomenon that will be the subject of an upcoming duel exhibition by art and life partners John Gutoskey and Peter Sparling, who will bring their Liminal Landscapes to Ann Arbor's newest art space, CultureVerse.

CultureVerse (309 S. Main St.) serves as a nonprofit arts organization, storefront, and gallery space focused on the intersection of art, technology, and life. CultureVerse was founded in May and celebrated its official opening in October. 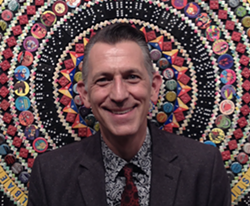 Liminal Landscapes, which opens on Friday, Dec. 3 with an opening reception starting at 5 p.m. and will be on display through January expands upon the ethos of CultureVerse as married couple Gutoskey and Sparling will share an exhibit of their works for the first time and will feature Gutoskey's mixed-media monoprints inspired by transformation and self-reflection and Sparling's "hybrid liminal worlds" which draw from the idea of kinetic energy — as inspired by his understanding of a dancer's movements, as he is a trained dancer — are painted using "calligraphy-like brush strokes on black canvas and large-scale murals."

In addition to the exhibition, CultureVerse will invite guests to explore the space and the organization's unique software including a step inside their 3D body scanner, which then produces a mini figurine of the individual. Honey, I shrunk ... myself? Anything in the name of art.