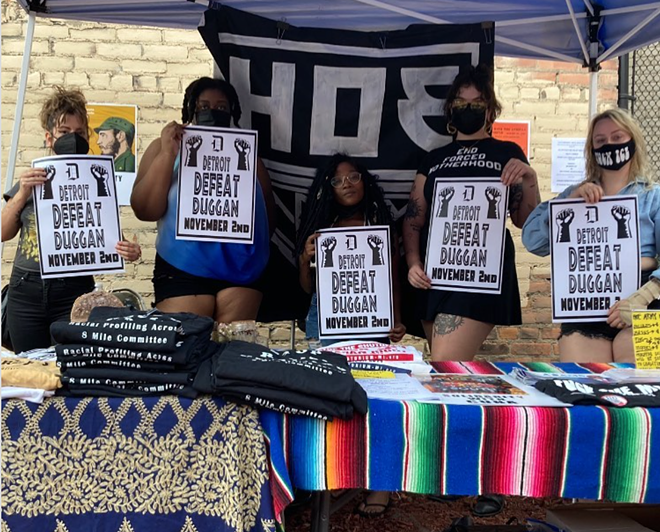 You know 304 is code for “hoe” if you’ve ever typed it in a calculator and turned it upside down when you were in high school. Detroit’s 304 Army, a band of unapologetic, sex-positive activists, has been using sex appeal to bring attention to issues like gentrification, immigration rights, and water shutoffs around Detroit for years.

On Friday, they’re teaming up with the Detroit Anarchist Black Cross (Detroit ABC) for a rocker skate night at the Rollercade, where they’ll have a booth for folks to sign up as a pen pal for local prisoners. So lace up the skates, and get ready to groove to some ’70s rock for a good cause.

If writing letters to someone behind bars out of the kindness of your own heart isn’t motivation enough, do it for the free NSFW photos. That’s right, everyone who signs up as a prison pen pal at the event can receive sexy photos from 304 Army members as a thank you.

But before you write 304 Army off as a group of bikini-clad punks who post raunchy photos on Instagram — which is actually also an accurate descriptor — know that the NSFW aspect is just a means to an end. It’s actually a genius way to hack social media algorithms and get calls to action out to those who might keep scrolling otherwise.

“We weaponize sex positivity by subverting visibility and directing attention to issues that are pertinent to our local community,” says Zoe Villegas, 304 Army’s fearless glam rock leader. “Social media algorithms take peoples’ selfies and nude photos and connect them with the most interaction, so we draw attention that way and use captions like, ‘hey now that we have your attention, here’s where you can submit your letter to the governor,’ for example.”

Selling sex to get people active in political causes is a classic bait and switch, and a massive “fuck you” to the age of social media influencers. Clearly, it works. 304 Army raised $6,000 at their annual “Fuck ICE Bikini Car Wash” for mutual aid directed toward undocumented immigrants and families in detention centers. They even campaigned for the release of former Detroit boxer Ray Gray who served 48 years in prison for a murder he says he did not commit. The group used their seductive photos as a reward incentive for anyone who called or emailed Governor Gretchen Whitmer’s office to advocate for Gray’s release. 304 Army members joined Gray in celebration when he received his honorary championship belt at the Detroit Golden Gloves annual tournament in July 2021.

Villegas says 304 Army will always “show up for the forgotten.”

The skate night is also a way to support a longstanding Detroit business and a funky weekend kick-off for people who aren’t just looking to get wasted on a Friday night.

“The Rollercade is very close to my heart because I’m from Southwest. It’s one of the oldest Black-owned skating rinks in the country and has been in the same family since 1955,” Villegas says. “We live in a time of heavy gentrification and it’s important to continue to support places that have been a staple for our culture and have consistently brought Detroiters joy. It’s only $10, it’s not at a bar and it’s an alternative to supporting a consumerist economy.”